An award-winning social enterprise food business and a registered charity, rooted in East London, founded in 2002 and helping to tackle food poverty in Newham.

Newham’s struggles with poverty and homelessness are well documented and while the situation has reportedly improved in the last 10 years, the problems loom large in East London.

And during this unprecedented time, the services offered by organisations like this one are more important than ever before.

When he moved to the borough, Eric Samuel, the CEO of Community Food Enterprise (CFE), was writing a theology dissertation. Coincidentally, he had decided to write it on poverty. But his previous visits to Newham, to see his family who had moved to the area earlier, hadn’t exposed him to the extent of the problem in the area.

“I had no idea that Newham was so deprived. I was really shocked at how bad it was,” says Eric, who was inspired to spark change soon after moving to Cranberry Lane. But this wasn’t to be a case of just feeding those in need, it would be about feeding those with the healthy food they needed.

Eric said: “People in Cranberry Lane had little or no access to shops. So I decided to set up a food co-operative in the community centre. I would jump in my car, go to Spitalfields Market and bring back loads of fresh fruit and veg, to allow people in the community to access these healthy foods.”

And from there, Eric’s food co-operative initiative bloomed: “Within a short time, we had a network of co-operatives, 22 in Newham – we were empowering residents and local people.” This included community centres and schools, where Eric’s fresh fruit and veg was having a hugely positive impact on the lives of Newham children. 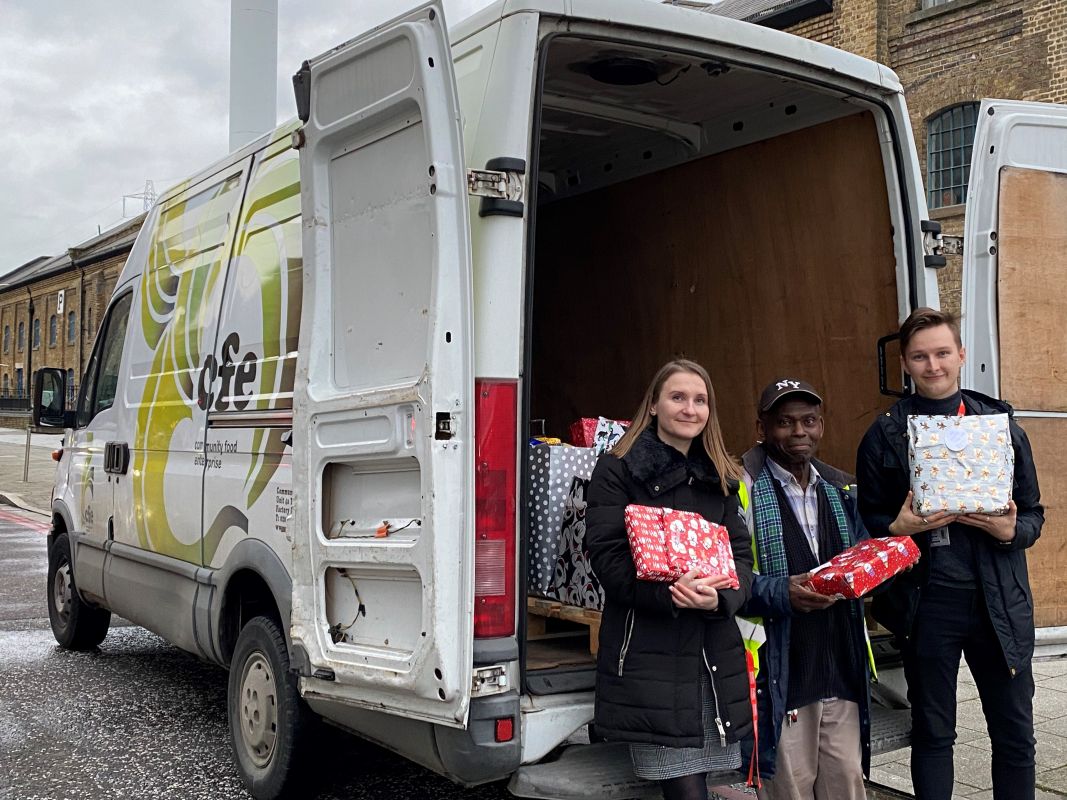 But when the recession of 2008 struck, it meant the food co-operative needed to be re-evaluated and restructured.

Eric said: “Things were getting difficult and other local organisations were going under, but we knew we had a role to play, with the infrastructure that we had. The work we were doing in schools was essential, but it was clear their funding was running out, too.”

By 2012 CFE was using its logistics infrastructure to continue its community support service, which offers services such as food co-ops, providing quality fruit and veg at affordable prices. It now delivers to over 85 different community projects, including breakfast and lunch Clubs, foodbanks, soup kitchens, asylum seeker projects and homeless shelters – in essence, ensuring food gets to some of Newham’s most vulnerable people.

How does ExCeL support CFE?

We make an annual donation to CFE

Each year, the team holds a Christmas collection of food, toys, clothing and other items, which CFE distributes throughout Newham

We work with event organisers to donate other surplus food products or items, such as merchandise from exhibitors.

Helping the vulnerable - the key stats:

CFE delivers to over 85 community projects in East London

It delivers 5,000kgs of food each month

It currently relies on around 10 active volunteers, but is on the look-out for more

This work continues today, acquiring surplus food from supermarkets, catering companies and other organisations – as well as other goods like donated toys or products confiscated from passengers at London City Airport.

Finance manager Afzal Hussein, who has been with the organisation for 10 years, feels CFE is more relevant now than it has ever been: “Over Christmas, when we deliver to women and children who have arrived in the UK with nothing, and we lay down the presents and the food, the kids go straight for the food, rather than the presents. It shows just how bad things are. I run around after my son to get him to eat. But here you have desperate children running towards food over presents. In the society we’re used to, that doesn’t happen. It’s really moving.”

Eric’s innovative, educational approach to tackling poverty in Newham hasn’t gone without reward. He fondly recalls a 15-minute conversation with the Queen when she visited Tate & Lyle in 2008. He was awarded an MBE in 2006 and was crowned UK volunteer of the year in 2002.

It’s almost 20 years since he moved to Newham and the proof of his success is in the numbers: CFE feeds around 10,000 people per month, delivering 5,000 kilos of food across East London.

Where would those people be without the work of his organisation now?

“We have to carry on,” he says – noting the support he gets from local businesses, like ExCeL London who support through financial donations and surplus food. “I’m here seven days a week, even when I should be in church!

“I’m an ordained minister. But I don’t feel like I need a ministry. CFE is my ministry, and we spread so much good this way.”

If you're able to safely volunteer or if you have food or other products you can donate to CFE for distribution across Newham and East London, please contact Eric: