London is home to a unique combination of world-class tech sectors. It is Europe's tech melting pot in combining fintech, blockchain, AI, and cybersecurity. The city remains at the centre of the tech spotlight and London Tech Week was a valuable vehicle for sharing ideas, showcasing the city’s brightest, and attracting international investment and talent.

Here are five reasons why entrepreneurs from across the globe continue to make London their home.

Technology companies in London are primed for success. In 2018, London tech companies received £1.8bn in funding, almost double any other European city. Fintech remains London’s most attractive sector and enjoys the most investment compared to all other UK tech sectors. London Tech Week was a major networking event for start-ups trying to raise capital.

We have the largest developer population in Europe, with 251,000 developers calling London their home. We have deep pools of talent in fintech, blockchain, cyber security, and AI. This talent steam is ensured through government supported STEM schemes in schools and by London’s world-class universities. London Tech Week also investigated the diversity within the industry, from encouraging more females to STEM in education through to the women in the tech workplace. It looked at ways to encourage greater inclusivity and diversity across the tech sector and ensure that London stays open to investment and talent from around the world. 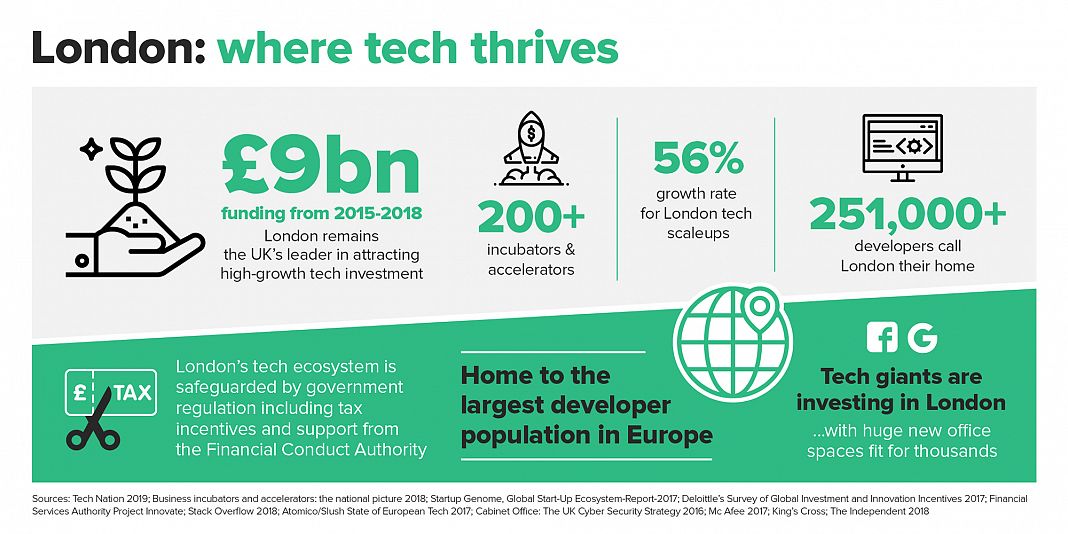 British consumers are enthusiastic early adopters, who love to experiment with new banks, new tech, and disruptive ideas, giving life to innovative companies and business models. British consumers lead the world by per capita e-commerce spend and over 42% of digitally active adults in the UK use the services of at least one fintech firm.

institutions, approachable regulators, and a variety of incubators, to accelerate growth. This includes The London Datastore, a free and open data-sharing portal from the Mayor of London, which provides anyone with open access to over 700 datasets on London with more data being opened all the time. This benefits apps like Citymapper and 600 others who started in London

Hear it from the experts

More tech giants are choosing London and in the past year alone, 91 international tech firms chose to expand or setup an operation in the UK capital with total investments worth £864m. Several of the world’s largest technology companies have also made long term expansion announcements and investments into London during in recent years. LinkedIn moved into its new UK HQ in Farringdon in January 2019, Apple are set to open a new London campus in 2021 at Battersea Power Station for 1,400 staff, and Google will open a new HQ in Kings Cross to house up to 4500 staff

London is renowned for hosting world-class conferences in tech sectors, attracting delegates from across the globe. ExCeL hosts over 30 technology-focused events, welcoming over 400,000 professionals in the sector. This includes corporate events for globally recognised brands such as Adobe, Salesforce, Oracle and the largest Google Cloud event in Europe, Google Cloud NEXT, as well as exhibitions including Bett, BVE, Big Data World, Marketing Technology Expo and TechXLR8.