EGX: In a different league

Sitting on the Boulevard here at ExCeL having a well-deserved break with a cup of coffee from the newly opened Orzo’s Deli, I am surrounded by eager faces.  There is a broad range of ages, families and a lot of very high-quality cosplayers from various gaming references all here for the first edition of the UK’s biggest gaming event, EGX London. 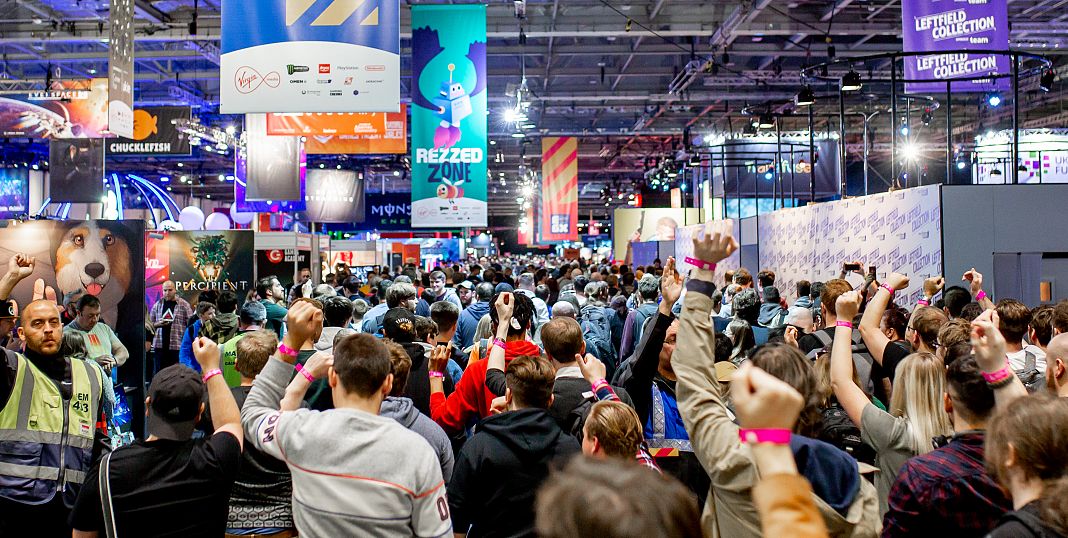 Reed POP has presented an incredible event.  Every console brand, publisher and indie developer is here, and the excitement is palpable. There are hordes of gaming enthusiasts queuing patiently to try out the latest titles including Doom Eternal, Avengers and get a sneak peek at the forthcoming Cyberpunk 2077 that was announced by Keanu Reeves at E3 in the summer. It’s like watching a couple of Crash Bandicoots pinballing around the huge range of gaming stations, props, activations and interactive features.

So far I’ve completed the Konami four player TMNT with three other grown men who share similar anecdotes of spending every available penny on the classic cab in their local video shop or leisure centre.  I’ve had a blast on the original Star Wars X wing shooter and failed miserably at getting anywhere on the sit in Space Harrier Cab (I don’t remember it being that fast but the 16-bit soundtrack sounds fresh as ever).

Spread over four days the event is occupying almost half of ExCeL. A B2B and investment stream is running on Thursday in partnership with UKIE and UK Games Fund Games development board. GamesIndustry.biz has a wide selection of initiatives for creative industry professionals to take part in, including an Investment Summit, Industry Zone and their popular GamesIndustry.biz Careers Fair.

From the quality of the presentation and the high level content, It’s clear to see why the video games industry is overtaking film and music as the most valuable medium of entertainment, and encouraging to see brands investing in live experiential activations.

I’ve been working with David Lilley and the team for the past six months to deliver this event.  Planted firmly in the autumn calendar the event has been extremely rewarding and challenging to deliver.

On Wednesday 16 Oct Excel was privileged to host the League of Legends 10th Anniversary European launch.  Game launches don’t come much bigger than this; for context Epic Games fortnight has 78 million players, whilst League of Legends has 115 Million. Hosted by publisher Riot Games and delivered by the incredibly talented agency Collider, the event saw 500 specially selected guests flown into London and hosted at the Hard Rock hotel.

Guests were treated to exclusive access to the game’s 10th anniversary iteration and insight from the game’s writers, artists and developers on what the future will hold for the title.  Riot Games clearly knows its audience and its roots.  The 500 guests are not just the best, highest scoring players, these are people who have positively contributed to the League of Legends community and while their appearance may seem unassuming, to most of us, their avatars are truly regarding as legendary. 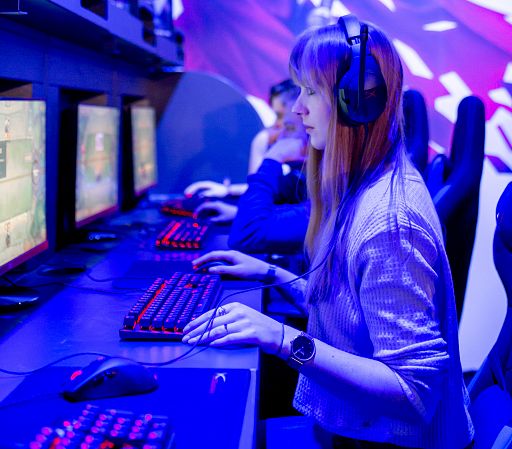 On arrival to ExCeL, guests are taken through the S11 entrance, fan-created artwork hangs on flags as we are taken through accreditation.  In groups of 50, guests are led into a low ceiling black box.  A circular truss with an LED screen displays the LOL logo which suddenly swirls, and various characters are animated appearing through a portal.  The portal opens to reveal an exquisitely recreated forest scene complete with rolling mist and eerie game music.  In one corner there is light and stirring a costumed character springs to life, aims a bow towards the crowd, a stream of lazer lights find their target and with a clang and a thud, and another character comes alive. The sequence is choreographed beautifully as each character moves with theatrical precision, displaying an ever increasingly dramatic martial arts skills and imposing poses.  The sequence ends and the final reveal begins with the curtain opening. A large stage set with mythic arches and two large stone guardians holding aloft the red and blue gems signifying the team allegiances in the game appear. A large glowing mineral gem displayed on the stage screen is emitting a deep bass hum (I love the speaker stacked hidden inside a pair of replica stone arches).  500 PC’s complete with high quality gaming chairs, that wouldn’t look out of place in a Lambourghini, are set ready for the guests to settle in for a seven-hour session.  On two sides are innovative double-decker structures for influencers to vlog including an editing suite. To our left catering stations have been creatively incorporated into the games mythology.  Guests can sit and take a selfie in a double-decker recreation of Billswater trading area from the title, complete with hanging skeleton, pirate-esque barrels and rowing boats. Guest break for lunch and dinner, ELH, our catering partner, have created a specially crafted menu with a subtle nod to gaming lore featuring  ‘*** Katsu Burgers’  and ‘Jandhus Nacho station’.

At 7pm guests gather in front of the stage and a rousing video montage shows popular pundits and correspondents including Jimmy Kimmel and BBC dismissing e-sports as one step removed from human activity for competitors to be considered athletes. This is interspersed with footage of a stadium filled with spectators watching e-sports tournaments and the glory of lifting the sought after trophies and increasingly swollen prize funds.  It’s a good point very well made to prove the credibility of the participants who are here at the leading edge of competitive gaming. 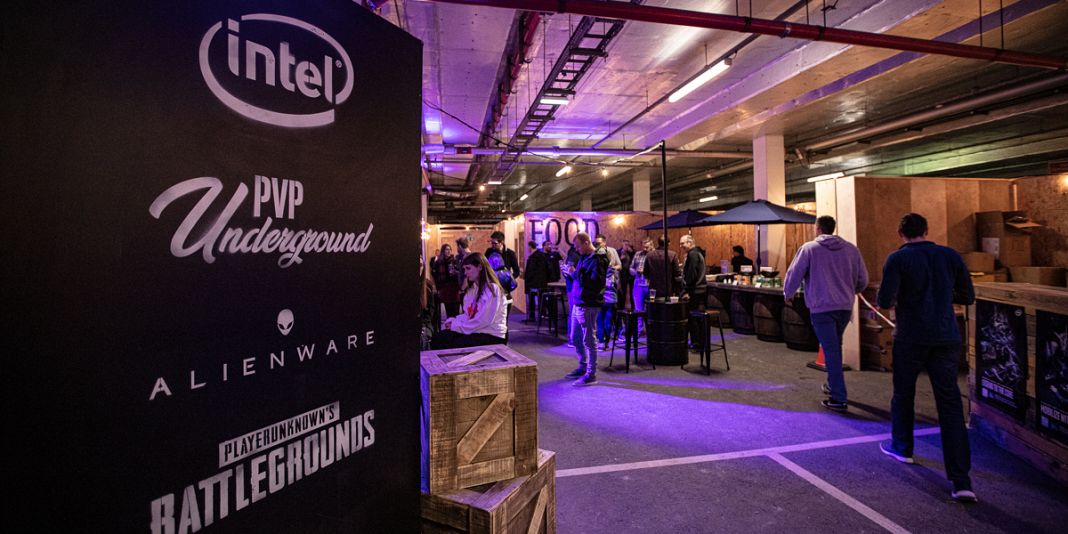 Not shy of pushing the venue to its limits, I was excited when an agency approached us with a brief for the technology brand, Intel.  Intel is integral for gaming and its chips are in pretty much every PC.  The brief was very specifically vague ‘Underground’.  I knew the prefect space. In between Waterfront Cafe 4 and CentrEd is a storage space, currently filled with paving slabs and other building materials Perfect! The client loved it and so we arranged for it to be cleared, cleaned and transformed into ‘PVP Underground, a fringe party event for just 150 selected guests including gaming superstars and influencers who would be treated to try out new Intel gaming hardware on titles such as PUBG.  Agency KTS transformed the space into an edgy dystopian lounge that wouldn’t be out of place in Borderlands 3, complete with oil drum tables, festoon lighting, battered chesterfield sofas and graffiti-panelled walls. A DJ spins breaks and a smattering of Acid House while the crowd play games and chat over a beer.  ELH is serving up a street food inspired menu to keep the players’ energy up.